The judges have returned with the winners of the special Global Warming edition of the weekly Captain’s Caption Contest! Edward Yee did the honors this week, and did he have his work cut out for him. We received a near-record 107 entries this week from the blogosphere’s most creative readership. In fact, Al Gore was so stunned by the response that he had the breath knocked out of him: 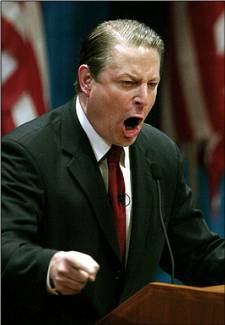 Here are the winners:
Captain’s Award (Most Original) — Donald S. Crankshaw:
Fighting to contain a violent yawn at his own words, Al Gore is mistaken for a raving lunatic.
You Have The Conn #1 (Great Minds Think Alike) — Wacky Hermit:
“wh- wh- heeeeee– wh- wh- heeeeee…”
“We can see the head! Now push! That’s it, push with the contractions!”
You Have The Conn #2 (Where One Man Had Gone Before) — Scotty:
In a certain epiphany for the ex-vice president, Al Gore finds out why then-President Clinton always stashed an intern or two under the podium. [Also for his other posts regarding bananas and leashes.]
You Have The Conn #3 (Squirrels In Space) — JBlake:
Naturally territorial squirrels, having seen trailors of disaster movie, once again mistake Algore for a tree full of nuts. Squirrelly Algore reacts, …naturally.
Report To Sick Bay, Along With Just About Everyone Else — Paul B:
Ladies and gentleman welcome to the freak show. This is the amazing Alzilla, watch as this stiff as a borad man inserts a lump of coal in is rectum and expells a diamond! Kids don’t try this at home.
Thanks to everyone who entered, and congratulations to the winners! Remember, here at CQ, everyone’s a winner — just some of us have higher winning percentages than others. Comments on this post will remain open, as usual, in order for the winners to gloat, the others to disparage Edward Yee’s intellect and/or my parentage, and for any other entries submitted just for the sheer enjoyment of amazing your friends and confounding your enemies. Don’t forget to check out Edward’s blog!
Send me a photograph or an e-mail with a link to a great picture you think should be the subject of our next Caption Contest, and let me know if you’d like to be the guest judge! I’ll have another picture for Friday — so be sure to come back then for the next contest.

One thought on “Caption Contest #12 Winners!”