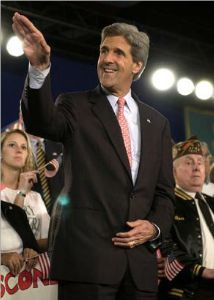 It must mean that MDatek, this week’s guest judge, has readied the winner’s list for this week’s Captain’s Caption Contest! And apparently MDatek is a big Minnesota Vikings fan, which means he’s unstable and unpredictable — so let’s see how that plays out, shall we?
Captain’s Award (Randy Moss Lateral to Moe Williams – Touchdown!) — Scotty:
The presumptive democratic nominee, who suspects himself of having a hernia, distracts the audience with his right hand while self-admisitering himself a quick turn-and-cough exam with his left.
You Have The Conn #1 (Brad Johnson touchdown pass to…. Brad Johnson?) — Jon Henke:
So, what you’re telling me is…you put your right hand in…and then you put your right hand out? And that’s what it’s all about? My god, now there’s a song with some nuance!”

You Have The Conn #2 (Michael Bennett rushes for a touchdown of 60 yds or greater in 3 consecutive games) — the pseudonymous Ben Zeen:
Wait, is that… is that John McCain? (bats eyelashes) Hi John! Over here! Over here! (to man next to him) He looked at me! Did you see?! Did you see! He looked right at me! … damn pants.
You Have The Conn #3 (The 2003 Vikings spoil the home opener in the newly renovated Lambeau Field) — Filthy McNasty:
“Yes, I DID just get a manicure this morning. Why do you ask?”
Report To Sick Bay (Pearson pushed off!) — JPearson:
“Hey, imagine running into Dr. Elders here at the VFW hall. I wonder if she can tell me why it hurts so bad right here when I pee?”
Thanks to everyone who entered, and congratulations to the winners! Remember, here at CQ, everyone’s a winner — just some of us have higher winning percentages than others. Comments on this post will remain open, as usual, in order for the winners to gloat, the others to disparage MDatek’s intellect and/or my parentage, and for any other entries submitted just for the sheer enjoyment of amazing your friends and confounding your enemies.
Send me a photograph or an e-mail with a link to a great picture you think should be the subject of our next Caption Contest, and let me know if you’d like to be the guest judge! I’ll have another picture for Friday — so be sure to come back then for the next contest.