Here’s a lesson for those prospective Irish speakers among you — all two or three of you, anyway. It’s a joke sent to me via the Admiral Emeritus from my aunt in central California, but it gives readers a chance to learn a little Gaeilge for themselves, a particular passion of mine.

So what did the Irishman say as Gaeilge? I’ll answer in the comments later, but let’s see if any CQ commenters can figure this one out.

If readers noticed an unusually quiet period at Captain’s Quarters, it’s because I took the afternoon off to travel to Winona, Minnesota. What’s in Winona besides beautiful landscapes and clean air? It’s the annual Gaeltacht Minnesota Irish-language workshop weekend — and I’m attending for the first time in three years.
I”ve written occasionally about my love for the Irish language. It has a distinctive, poetic beauty but is very challenging to learn. One of six Celtic languages — a branch on its own from the Indo-European language root — it uses a verb-subject-predicate structure that takes time to absorb. Gaeilge uses intriguing and maddening processes such as lenition and eclipsis that change the spelling and pronunciation of words in certain circumstances, which is like learning a vocabulary that likes to play hide-and-go-seek.
For instance, here’s the start of an article from the Irish-language website Beo about an American city. Can you guess which one?

`
Here’s the translation, as best as I can do:

Traffic jams are the latest controversy in New York. Talk has it that the city has been gripped with too much traffic, and work is in progress to debate plans to decrease it.

It sounds much less mundane in Irish … trust me. I’ll be posting over the weekend, but probably rather lightly. I will take the day off from the Northern Alliance Radio Network, but be sure to tune in and listen to the rest of the crew tomorrow, starting at 11 am CT.
In the meantime … oíche mhaith!

One of the hobbies I had before succumbing to my obsessive passion of blogging and political commentary was the study of Gaeilge, the language of Ireland. One of six Celtic languages, its renaissance has been slow and halting since the independence of Ireland in the 1920s. Few speak it as a first language, and only around 20% or so of the Irish population speak it conversationally, despite its status as one of the two official languages in the Republic of Ireland. However, its use in poetry and music is unbelievably beautiful, and its connection to Irish culture is unmistakable.
I live in an area where Irish language resources are in good supply. Chief among them is the non-profit group Gaeltacht Minnesota, which holds free language lessons on a weekly basis. My instructor, when I had time to attend, has started her own blog called Scátháinín Mháire for some amusement in Irish language study. Pronounced SCAW-neen WHY-ruh, it means “Mary’s mirror”, and it reflects her gentle and playful nature.
In one post, Máire points out a typo on an Irish sign in the airport, and in another, she gives a quick lesson for students. She shows a picture of a house on blocks, and lists three statements:

The third means “Happy birthday, Pam! (another friend)”. I’ll let you guess what the other two mean. I plan to start taking it up as a hobby, so I’ll need to make sure I have the other two correct before I return to class!

You know it’s Saint Patrick’s Day in the Twin Cities when green makes its way onto the breakfast table: 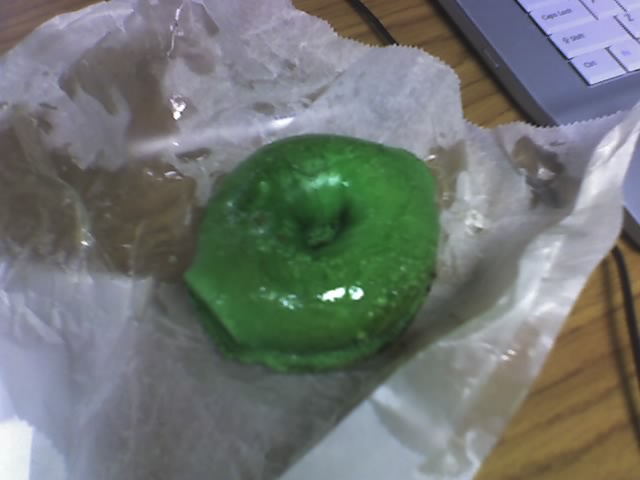 It tasted pretty much like a normal bagel, but somehow my Irish eyes were smiling the entire time …