One of the challenges we faced yesterday was the lack of beverages available at the Garden, an unusual problem that I hadn’t anticipated. I assumed that we would have all of the concession stands open, but they seem to be closed, presumably to simplify security for the convention. 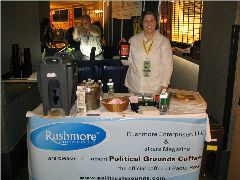 Stepping into the breach to soothe dry throats is Political Grounds, which describes itself as “America’s Politically-Incorrect Coffee”. They’ve set up a booth giving away free bottled water and very good cups of coffee to anyone who wants to stop by their booth. Julie also gave me a pound of their coffee, which comes in eight varieties. I selected Osama’s Mama, which states that it’s “dedicated to our fighting men and women searching those caves for the evil one who brought us the events of 9-11. Only a mother with a foot-long beard could love this guy. Osama, where’s your mama?”
How can I resist posting about that? Check out their other offerings as well. I’ll tell Julie you say hello.