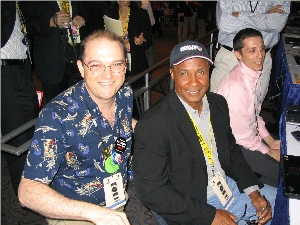 I grew up a rabid Pittsburgh Steelers fan, ever since I watched the Immaculate Reception in the playoff game against the Oakland Raiders. One of the best players on the team that won four Super Bowls was the incredibly acrobatic wide receiver, Lynn Swann. Despite having gone to USC, Swann had a grace and determination on the field that not only won him a spot in the Hall of Fame, but almost definitely made him one of the best slow-motion reply subjects ever in sports.
We found out yesterday that Swann would be appearing at the convention, one of a number of celebrities that have made their way to New York to support the President’s re-election bid. I’ve been careful about fan-boy posts, but in this case, I hope my readers will forgive me for ensuring that this moment gets archived for posterity.