An interesting confrontation took place just in front of Bloggers Corner a few minutes ago. Sean Hannity has a booth just a few feet from our tables, and we’ve had front-row seating for his show yesterday, today, and the rest of this week, too. While on the air, Democratic Party Chairman Terry McAuliffe passed by the booth — on his way to the Air America table, no doubt, which is located right around the corner from our booth. The two of them began yelling at each other, with Hannity demanding that Kerry apologize to the vets he smeared since 1971 as war criminals. McAuliffe finally walked off, laughing, but people stood and looked at each other, surprised at having seen real news (of a sort) occur at a political convention.
Georgia Senator Zell Miller is on air with Hannity at the moment, and he looks sharp. I can’t wait to hear his speech tonight.
UPDATE: Hannity has McAuliffe on the air in a moment … 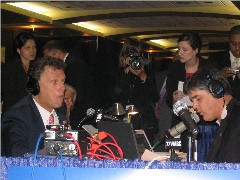 UPDATE II: Hannity and McAuliffe went toe to toe on the air, and we got ringside seats. Hannity started off by talking about Unfit For Command, which McAuliffe admitted he has not read. When Hannity pressed him to say whether the 200+ combat veterans were all liars, McAuliffe instead said that he had personally spoken with three or four of Kerry’s shipmates (the band of brothers), and he was convinced they were telling the truth.
Hannity also tried to press McAuliffe for answers on these questions, all of which McAuliffe refused to answer:
* Christmas In Cambodia (several times)
* John Kerry’s support for a nuclear freeze during Reagan’s term
* John Kerry’s vote against the death penalty for terrorists during Bush’s term
Interestingly, just before the last two questions, McAuliffe had complained that Hannity wouldn’t discuss Kerry’s Senate record. As soon as he did, however, McAuliffe kept changing the subject back to George Bush’s National Guard service.
Hypocrisy, thy name is McAuliffe…

One thought on “Rumble In The Blogger Jungle: Hannity Vs. McAuliffe”