Busy morning today, but I wanted to show you a couple of pictures from the Little Admiral’s 2nd birthday party, which unfortunately the First Mate and I had to miss. Thankfully, Sean from Everything I Know Is Wrong took a few snaps for me to enjoy. (Sean and I are related through my son’s marriage, and he’s a terrific guy with a terrific blog — check it out.)
I heard that she had been showing everyone a microscopic “owie” on her knee and demanding that everyone kiss it. In the first picture, you’ll see the only one who refused, Sean’s son Connor, who apparently won’t indulge such nonsense! The pictures are in the extended entry. I’ll be back to regular blogging a little later on. 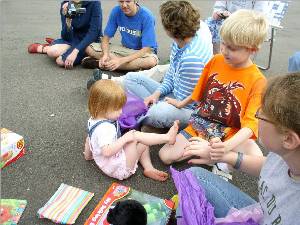 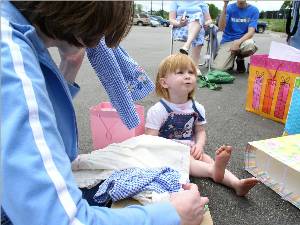