When I moved out to Minnesota seven years ago from California, one thing I knew I would miss is the great Mexican cuisine readily available throughout my home state. You can’t hardly drive a mile in the LA area without passing a Mexican restaurant of at least moderate adequacy. Here in the Great White North, however, finding anything worthwhile is well-nigh impossible. For one thing, beef dishes rarely feature anything other than ground beef instead of the far-superior shredded beef, and in some places, the ground beef is left unseasoned. Most of the suburban restaurants use the store-bought hard shells for their tacos, even the Don Pablos chain, at least until recently.
By far the worst experience I had occurred before I’d even moved out here. Well-meaning friends took me to a local eatery called La Fonda’s, which (as luck would have it) is located around the corner from the house we bought the next year. When we walked in, I could tell the place was a dive. Cheap tables, tiny plastic tumblers for drinks that you’d use for your youngsters, and the food was just … atrocious. I ordered a beef enchilada and was presented with a tortilla wrapped around plain ground beef that looked and tasted as if it had just come out of the microwave, with a splash of cheap enchilada sauce. The taco was even worse, with a stale hard shell and a few strings of lettuce and cheese on top. The chips were the best thing about the meal — mostly because I love Fritos, even right out of the bag.
Ever since, for the last eight years, I have recounted my experience at La Fonda’s as a warning to friends and family about Minnesota Mexican cuisine, even after other, new restaurants improved the local situation. I swore I’d never return to La Fonda’s despite its convenience. However, since my sister came to town this week and has the same twisted sense of adventure that I do, we decided to have one really bad Mexican-food meal that we could gripe about later on. I even took my digital camera with me to record the catastrophe.
I was in for a huge shock. 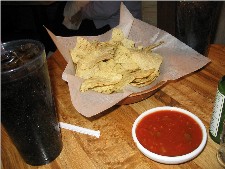 When I walked in, I couldn’t believe it was the same place. The interior had been completely renovated and appeared inviting. We sat down, still giggling about the notion of deliberately eating bad food just for a laugh, and when the chips arrived, we rolled our eyes. While the Fritos had disappeared, their replacements seemed just as bag-bought … but at least they scooped the salsa well, and the salsa had some kick.
My sister ordered the fajitas, and I was tempted to do the same, but I thought that if I wanted to make sure I had their worst effort, fajitas weren’t going to do it. Instead, I ordered a trio combo of a cheese & onion enchilada, chile relleno, and beef tamale. As I told my sister, I fully expected to leave the restaurant hungry. 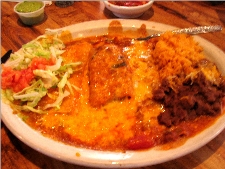 However, when the plates arrived, I could hardly believe my eyes. My plate, as you can see in the slightly shaky picture here, looked like … Mexican food! (I turned off the flash after startling the couple next to us on a test picture. Yes, I got some strange looks.) Not only had La Fonda not skimped on sauce, but the cheese overflowed from every entree, and the beans and rice, which I just sample, even looked good. I broke open the steaming tamale to find shredded, seasoned beef!
Didn’t these guys know we were in Minnesota? 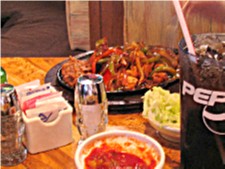 My sister’s fajitas came a moment later. Piled high with chicken, onions, and bell peppers, it easily outstripped the three tortillas that came with the meal, and would have outstripped the two extras the waitress brought as well. Sis says the fajitas were terrific, and the quick bite I had seemed to bear that out.
Now I felt pretty danged foolish. I had promised my sister a really lousy time, and instead stumbled onto a good Mexican restaurant in the suburbs. How could I have made such a terrible error? The waitress told me that the ownership changed hands a couple of years ago, and the new owners closed it for awhile for a remodel and revamp. So, while I spent the last couple of years bitching about the lack of good Mexican cuisine, I drove by La Fonda’s every day to go to and from work.
What an idiot.
If you’re in Eagan, check out La Fonda. I won’t say it’s the height of Mexican cuisine — a couple of places in the Twin Cities are actually pretty good — but this turned out to be an unexpected pleasure.