Today’s USA Today headline: “Bush stumps for ‘guest worker’ program in Cancun”
He might find it more effective to stump for the program while in the United States. Do we really need an advertising campaign in Mexico calling for even more border crossing?
In the meantime, here are the images that the Mexica Movement want to promote from the anti-border enforcement rallies held earlier this week: 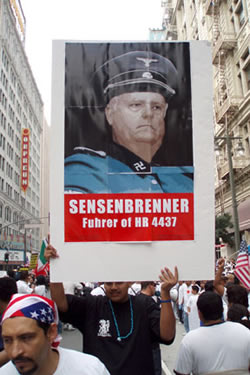 Yes, American legislators as Nazis. Nice. Of course, the anti-Semitism of their own movements wouldn’t be germane, would it?
Here’s another sign they proudly display at their site showing how much the reconquitas love the United States: 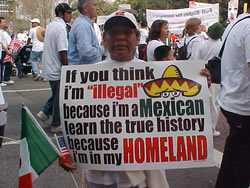 That matches up with a description provided with another image that shows American flags held by marchers. Do they point to this to show their love of their adopted country? Not exactly:

One of the more negative parts of the march was when American flags were passed out to make sure the marchers were looked on as part of “America”.

Being part of “America” — note the scare quotes — is negative. And in case you really miss the point, we have this: 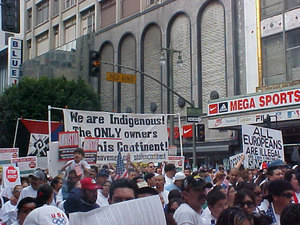 It’s the “Europeans” who are the illegals and should be driven out. At least no one can say they didn’t tell us exactly what they want — and it sure isn’t assimilation and a desire to become part of the American dream.