Mitt Romney scored a major conservative endorsement from Sean Hannity earlier today, The radio and television commentator, whose shows reach millions, stated that he would vote for Romney as the race settles down to the former Massachusetts governor and Senator John McCain. Listen to the brief audio from his radio broadcast earlier today:

Over the next few days, we will see sides get chosen amongst high-profile Republicans as the primary moves through its inevitable binary stage. McCain has Arnold Schwarzenegger, and Romney has Hannity. Which can deliver more Republicans and more conservatives? Arnold will have a big impact on California, but Hannity will have a more national impact. Whether either of them can convince people who are either inclined to vote for the other candidate to switch, or whether they’re singing to their repective choirs, remains to be seen.
Most of the appeals will come on a more personal basis. Friends and family who get passionate about a candidate will have an impact — and I have an example. My mother decided to attend a Romney rally in Orange County, California today, and managed to get her picture taken with the candidate. Here’s her account of the event:

This was held in a warehouse for a furniture store and it was packed full of Romney backers and overflowed to the outside. I believe there was a crowd of at least three hundred to four hundred people, maybe more. They all were very enthusiastic even before Romney made his appearance but once he was in and speaking, the crowd cheered at every sentence and went along in answering unison.
I was struck by Romney’s ability to look at each person with whom he shook hands. He did not offer his hand to one person while turning and talk to another. His focus was on one person at a time. He was gracious with all, and I came away feeling better about him because I was a Fred Thompson backer and wasn’t sure if I could be a Romney backer.
What makes this an especially odd but a surprising candidate for me is Judie, my sister who is several years younger, have never backed the same candidate before. But there we were together, cheering Romney on for very different reasons. We both want Romney to win and want to stop McCain from getting the nomination. It was a very uplifting experience for both us.

And that’s how it’s done, by all candidates. 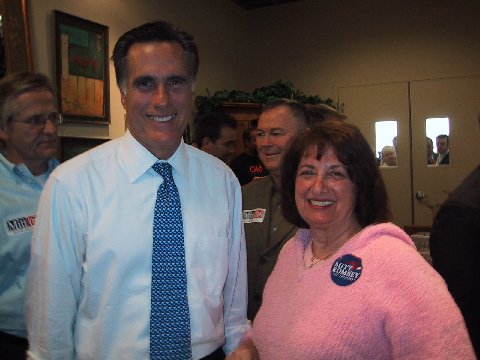 One thought on “A Couple Of Romney Endorsements”