One of the frustrations surrounding the revelation of the Able Danger program is the knowledge of what might have been — how we could have potentially stopped the 9/11 attacks and saved thousands of American lives. Had the American intelligence community been allowed to coordinate with each other and with law enforcement properly to constitute an effective defense against terrorism, the data that Able Danger produced would have captured Mohammed Atta and his core pilot cell in plenty of time to stop al-Qaeda’s biggest victory.
Even afterwards, the willful disregard of the successes of Able Danger has led many to question in growing frustration why the Pentagon has not put another program in its place. With the threat still high for retaliatory strikes from AQ sleeper cells, a data-mining program like Able Danger seems more necessary than ever. In a new program, however, the Pentagon would need to integrate it into an overall counterterrorism strategy that links all of the alphabet soup of intelligence agencies in the American armada.
CQ has learned that such an effort has already been launched at the Pentagon. Titled “Able Providence”, the effort seeks to use the Able Danger “engine” to generate hot leads for counterterrorism and law enforcement agents to pursue. Located in the Office of National Intelligence, AP will serve all agencies, as this unclassified graphic shows: 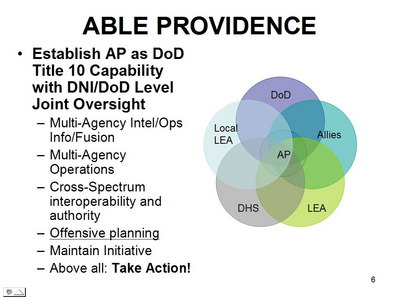 The Able Providence project, estimated at an initial cost of around $27 million, will report jointly to the Director of National Intelligence (John Negroponte) and the Joint Chiefs. The datamining component of the project, named KIMBERLITE MAGIC, will follow and update the SOCOM and NOAH efforts of the pre-9/11 period. After an initial burn-in phase, the Able Providence team will then coordinate with the National Counterterrorism Center (NCTC), SOCOM, Joint Forces Command (JFCOM), FBI, CIA, NSA, DHS (Customs/TSA, etc) and partner with Army 1st Info Ops Command (IDC), Army Asymmetric Warfare Group (ASW), Navy DEEP BLUE, Air Force CHECKMATE to produce actionable “Decision Support” Option Packets. AP would then act as a conduit for these efforts to law enforcement agencies for immediate domestic action when required.
I will have more on this as the day goes along, including more graphics to explain the program in full.