BUMP: Just a reminder that we will be also discussing the Virginia Tech story. Be sure to call and join the conversation.
On today’s edition of CQ Radio, I’ll have an interview with Bernard Goldberg — journalist and author of such excellent books as Bias and The 100 People Who Are Screwing Up America — as he launches his new book, Crazies to the Left of Me, Wimps to the Right: How One SIde Lost Its Mind and the Other Lost Its Nerve. The book launches today, and on Saturday I had the opportunity to have a long conversation with Goldberg, one of the most entertaining interview subjects. We discuss:
* Don Imus — “A very unlikable and unpleasant person … but Don Imus is not what’s plaguing black America.”
* Republicans — “Betrayed their principles”
* Al Sharpton – “If there are two people in the whole world who should not be leading a moral crusade against Don Imus, they are Al Shaprton and Jesse Jackson.”
* The importance of culture – “If [culture] doesn’t matter, then why is everyone so upset about Don Imus?”
You’re going to hear a lot of quotable passages from Bernard Goldberg today — so be sure to tune in at 2 pm CT. I’ll have plenty of time to take calls, and I’d like to get a conversation going about the lessons we can learn from the Virginia Tech tragedy yesterday. Call in at 646-652-4889! 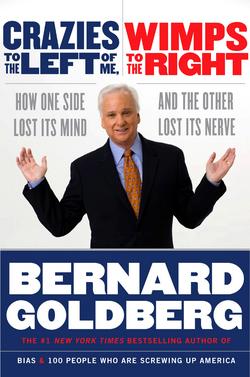