We haven’t had a caption contest for quite some time here, and what better day to do it than the first working day of the political year? With the Iowa caucuses around the corner and a full year of campaigning both behind us and ahead of us, we need a few laughs. Here’s a picture of Hillary Clinton on the Iowa stump, apparently signaling … something: 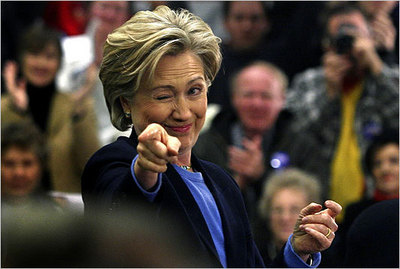 So what was Hillary signaling? Give us your best caption ideas in the comments section only. Anyone sending e-mailed captions will have to draw flowcharts of Hillary’s position on drivers licenses for illegal immigrants. I’ll try to pick the winner during my more-or-less live coverage of the Iowa caucuses tomorrow evening. If any blogger wishes to serve as judge for the contest, I’ll be sure to give the requisite pluggage.
Have fun, and remember — Hillary’s keeping an eye on you!
UPDATE & BUMP: Lots of great captions in the comments, but also in the new Photo Crank option I added late yesterday. This makes a pretty good way to do caption contests; people can make them directly onto the picture, and everyone can vote on the submissions. Check it out and let me know what you think. You just need to click on the blue bar at the bottom of the photo to add your own caption or vote on others.