It’s been a long time since we’ve had a Captain’s Caption Contest — I got focused on more serious work, and had a heck of a time finding guest judges. However, we have a special occasion to celebrate at this time. It’s a coming-out party of sorts, a kind of Genocidal Madman Debutante Ball. In fact, for those lucky enough to catch the trial of Saddam Hussein live this morning, we even got to see Uncle Saddy dancing with his guards for a moment, before he gave them a go-hither stare.
Thanks to a suggestion from long-time loyal reader Peyton Randolph, we’re going to have a blast from the past and do a Caption Contest just like in the old days. Here to explain the rules is Uncle Saddy himself: 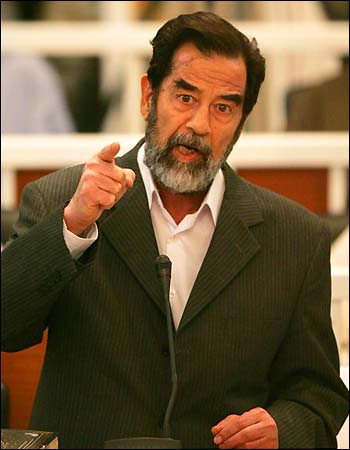 Enter your caption in the Comments section only. If you e-mail it … then I kill you.
Enter as often as you like. If you don’t enter … then I kill you.
Only add comments pertaining to this contest. If you troll … then I kill you.
Ooooo-kay, Uncle Saddy, I think I’ll take over from here. Since Peyton sent in this entry, we’ll let him judge the contest. (And if he refuses … I’ll kill him.) I’ll come up with an inexpensive but appropriate award for the overall winner of the contest. Bribes and flattery are always welcome at CQ — they won’t help you win, but they’re welcome nonetheless. I’ll keep the contest open through Sunday noon, and we’ll announce the winners later that evening. That gives contestants four days to get their entries in, which is three more than the length of Uncle Saddy’s trial.
Cry “Havoc!” and let slip the dogs of, er, caption contests!
UPDATE and BUMP: Hey, we’re having a great response to this contest! Be sure to get your entry in the comments before it closes at noon tomorrow. Peyton’s got his eye on the progress here and has already said it will be a tough call …
COMMENTS CLOSED: Peyton will now make his decision — and a tough one it will be, I guarantee you. The winners will get announced in a new post later today!