Despite what you read about him in the papers, John Kerry is rumored to be quite a sport — in fact, Captain’s Quarters has a picture of Kerry in his element, obviously a master at the game: 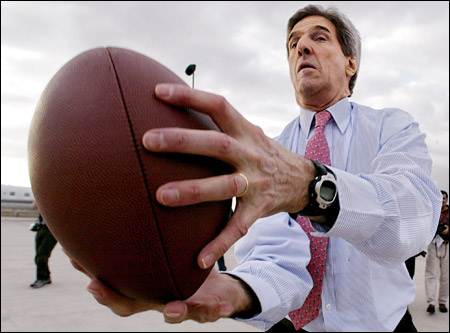 Yes, Kerry is a true New England Patriot … make sure you note that the Captain put that in writing, too. Why don’t you put your caption on this photograph in the comments section? The contest is open until Tuesday at 6 pm CT, and enter as often as you like.
This week, we actually have a prize besides the admiration of your friends and the envy of your enemies! My best friend, Steve Filippini, has recently self-published a memoir of his days in the field as an alarm technician (which I informally helped edit), Fix It Or Pull It, which is now in the On My Desk section. (It’s also available at Barnes & Noble.) Steve has donated a copy of his book to the winner, and so he gets to pick the winning entry.
Yes, this is a shameless plug, but Steve’s book is a riot — and all true stories, as I can attest, since I was around for most of them. You’l love it, and the winner will especially love the price!
UPDATE 3/13: Bumping this to the top … great entries so far!
BUMP 3/14: Keep ’em coming!
BUMP 3/15: One more day left!
BUMP 3/16: Only a few hours left to get your entry in!
UPDATE 3/16: Closing comments now. Looks like a close play — we’ll take up to the replay officials for a decision!

The results are in for the weekly Photo Caption Contest! The Patriette, at the twilight’s last gleaming, began the laborious process of weeding through the 62 outstanding entries in the comments section. These, then, are the winning entries that the rockets’ red glare and bombs bursting in air give proof are still there:
Patriette Missile Award — Cassandra:
Edwards: “Well… if you’re sure this will win over the Log Cabin Republicans…”
The Patriette’s Star-Spangled Banter Award (for the most creative dialogue used as a caption) — Don:
(for those who remember the old Saturday morning ‘Justice League’ superhero cartoon):
Both: “Wonder twin powers activated!”
Kerry: “Form of: A Presidential Candidate”
Edwards: “Wait! I wanted to be the Presidential Candidate!”
1st Runner-Up — Bryan:
The attached-at-the-brain Democratic candidates were separated after a long, grueling procedure that led to one’s demise and the other suffering from schizophrenia and delusions of grandeur.

2nd Runner-Up — Jim S:
John Edwards turns down a surprise offer from John Kerry to be his “Third Lady”.
Honorable Mentions:
Brian:
“By marrying John Edwards, clearly I am showing my opposition to gay marriage.”
Pile On:
I’m John Kerry, and I have approved this public display of tender man on man affection.
Report to Sick Bay (On The Double) — Erick-Woods Erickson:
Kerry: “Boy, let me put this in terms someone from North Carolina can understand. If you don’t drop out now, I’m gonna make you squeal like a pig.”
Congratulations to all the winners, and thanks again to everyone who participated. Big, big thanks to The Patriette for doing all the work. (Man, I love that!) As usual, the comments section on this post are wide open for disputes, slander, and obloquy towards the Captain and the Patriette for their selections, as well as any late entries that people want to throw in. Just remember, there are no losers here except the guy who runs this garbage scow …
This Friday, I’ve arranged to actually have a prize for the top caption — a humorous book written and self-published by a friend of mine. I’ll post the details along with the new picture on Friday. We’ll see you then! 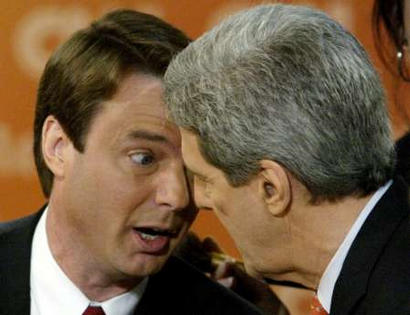 It’s time for the weekly Photo Caption Contest, and The Patriette has found a doozy for you. Put your crafty minds to this picture:

Put your best quip in the comments, but beware; our previous winner, Bryan, later complained of painful swelling of the ego and difficulty getting his head to fit through doorways! Comments will close on Tuesday, March 9th, at 6 pm CT, when The Patriette and I will carefully select the winner.
UPDATE: Time to get your entries in, if you haven’t already done so! I’ll keep the comments open until 8 PM CST, as I’m not likely to have Internet access at 6 pm anyway …
UPDATE II: Comments closed! Going to the judges’ scorecards …