I’ve been meaning to test the new CQ design with a YouTube presentation but just hadn’t gotten around to it. This one should do nicely. It uses South Park animation to address the most bitter divide on the Internet, and reaches a conclusion that will satisy both sides. Hope you enjoy!

Remember when people gave each other fruitcake for Christmas? No one ever ate it, of course, but we all gave it like it was manna from heaven. Even if the fruitcake inevitably exited the house in much the same condition it entered — harder, perhaps, but intact — at least it didn’t come pre-ingested:

In this season of strange presents from relatives, Dorothy Ferreira got a doozy the other day from her 82-year-old sister in Waterloo, Iowa. It was ugly. It weighed four pounds. There was no receipt in the box.
Inside she found what looked like a gnarled, funky candle but could actually be a huge hunk of petrified whale vomit worth as much as $18,000.
“I called my sister and asked her, ‘What the heck did you send me?’ ” recalled Ms. Ferreira, 67, who has lived here on the eastern tip of Long Island since 1982. “She said: ‘I don’t know, but I found it on the beach in Montauk 50 years ago and just kept it around. You’re the one who lives by the ocean; ask someone out there what it is.’ ”

And just when one would think this story gets weird enough, it turns out that the reason whale vomit gets that much attention and cash is because it’s particularly valuable … for perfumes. Ambergris has commanded large amounts of money and is fairly rare, which means that Ferreira may have been given a four-pound lottery ticket. Only two problems remain for Ferreira: no one can find an ambergris expert any more to identify it, and its sale is forbidden in most cases due to anti-whaling laws.
I think I’d prefer the fruitcake. It’s just as inedible, but I don’t need to hire a non-existent expert to tell me that.

Only seven days remain of my campaign to garner enough write-in votes to win election as the Mayor of Eagan. My brutal schedule had me talking with a guy in Eagan about my candidacy just a couple of days ago, and then again today. I was busy lining up campaign appearances at the grocery store and my local Best Buy (in the DVD section), when I came across this post at IMAO:

I’m sorry to disappoint, but I have no evidence that Glenn Reynolds is gay. While it is a well known fact that Glenn Reynolds murders hobos, it has hardly ever been suggested that he has sex with them first (or afterwards). Also, while puppy smoothies are a well known aphrodisiac in the gay community, it’s not as solid an indicator of gayness as seeing a guy drink Fresca.

Fresca? Why, I’ve enjoyed the grapefruit-enhanced taste of Fresca since I was a young lad! If this got out, it could doom my efforts to win election. I decided to do a little misdirection and throw my political opponents off track. I visited a kindergarten classroom earlier in the day and told the children that if they listened to their teachers and parents and cleaned up well after fingerpainting, they would succeed in life — otherwise they’d end up as a Senator from Massachussetts. And Lord knows how embarrassing that can get.
Anyway, I think I dodged a real bullet with the Fresca issue, and it’s a good thing, too. I planned to talk to a couple of people at the local Subway this weekend about my candidacy, and having to explain the Fresca in my hand would just slow my momentum. With any luck, I may roll up as many as fourteen write-in votes, after which I can enjoy a nice cold Fresca in celebration.
But don’t say anything to anybody in the meantime.
UPDATE: My Canadian connections offer some advice; John from Newsbeat1 suggests that I get some electronic voting machines to help seal my victory. I’d try that, but the last time I did, they made me clean all the displays from where I wrote my name. With Fresca, actually.
UPDATE II: You think the folks at Fresca might send me a free case with all of these links?

CQ reader Consabo decided that we needed a moment to lighten up, and he sent this parody of Star Wars now appearing on YouTube. Normally I don’t go in for too much of the parodies on the site, but this one is simply too good to let pass unremarked. If you wonder what happened behind the scenes of the Galactic Empire, this short movie explains everything (rated TV-14, I’d say):

Hope you enjoy the brief moment of geekery here at CQ!

Breaking news — must credit Adnan Hajj!
The reclusive relief pitcher for Fidel Castro has finally made a public appearance. He’s seen in this Adnan Hajj photograph, bravely defying the West and standing with his revolutionary brothers in Beirut: 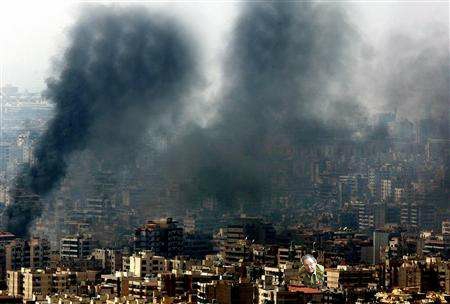 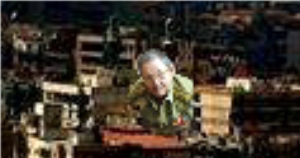 You can see Raul there in the bottom right quadrant, peeking out from behind the buildings of Beirut. The Cuban people will thrill with pride to see Dear Placeholder fighting against the imperialists. He’s bigger than they remembered, too …

For those fans of Mystery Science Theater 3000 who have had a gaping hole in their lives ever since it went off the air, good news has come our way. Mike Nelson, the creative genius behind MST3K and a good friend of the Northern Alliance — and a really nice guy — has launched a new project that promises to fill that gap, and more.
Mike has launched the beta version of Rifftrax, a clever way to have an MST3K experience on demand. Mike will create podcasts that match up with our favorite films (meaning our favorite cheesefests), designed to be played along with a DVD that the viewer rents or buys. The site will eventually have downloads of many films, but right now Rifftrax users can download Mike’s commentary for Roadhouse, a Patrick Swayze laugher that somehow included Ben Gazzara and Sam Elliot. (It also has Kelly Lynch, which seems about right for this classic cheeseball.)
Give it a try, and also don’t forget to vote for your choice as Rifftrax’s second feature. I chose Showgirls, which desperately needs the Mike Nelson touch. Leave your feedback on how it works, and keep checking back for more commentaries! (via Fraters Libertas)

For CQ readers who love their daily dose of Day By Day, Chris Muir’s excellent cartoon, he now has a clever new way to deliver his trenchant commentary directly to you. You can follow the exploits of the blogosphere’s favorite foursome on your cell phone, starting immediately:

SmashPhone, a mobile phone comic strip network, today announced it’s bringing Amy DeZeller’s Dating Amy and Chris Muir’s Day by Day comic strips to mobile phones everywhere. Viewers can access the SmashPhone Comic Strip Network through Verizon, Cingular, Sprint, T-Mobile and many other carriers. The comics are served by SmashPhone for free (although phone company data charges may apply).
“I’m excited to be included by SmashPhone,” says Dating Amy author Amy DeZellar. “I think it’s the first time a book has been promoted this way.” DeZellar is the author of the hilarious blog-turned-memoir Dating Amy that tracks DeZellar’s experiences dating fifty men over a two year period. Dating Amy, the book, is published by Warner Book’s 5-Spot imprint that’s targeted toward “chicks with brains” and is available in bookstores everywhere. Dating Amy, the cartoon, is a limited edition created by author Amy DeZellar and artist Kate Lint.
Chris Muir’s Day by Day comic strip is based on each day’s political events. How’s that for topical? This shoot-from-the-hip toon follows four characters and their reactions to news and thoughts of the day. Day by Day garnered 12,000 loyal daily readers by encouraging websites to embed the daily comic strip freely. “Comic strips have to be on mobile,” says Muir. “It’s adapt or die! All the market growth is on phones, especially with kids and comic strips.” Muir said he chose SmashPhone because they can reach more phones than anyone else (over 1.2B phones).

Now we can dial up some fun!

Nathan Goulding at the National Review’s Media Blog caught a couple of interesting captions for pictures of Osama bin Laden at AP and Agence France-Presse yesterday. The captioners did world-class gymnastics to avoid referring to the al-Qaeda leader as a terrorist. Instead, both wire services called bin Laden a “Saudi dissident,” which somehow implies that the mastermind of attacks that have killed thousands of people has some moral equivalency with Natan Scharansky.
Nathan decided to see how well the blogosphere and its readers could emulate the example given by our older siblings in the media, and I submitted entries for both pictures. I wound up with one winning entry, while a Media Blog reader took the other honors. I hope you enjoy it as much as I did.

Mitch Berg points with pride to his high score on a grammar and language skills test on OKCupid, so I figured I’d check it out for myself. You can see the results below:

As I drove the First Mate home from her dialysis session on Wednesday evening, I almost drove off the road when I passed a billboard along the highway outside of the office. It was so peculiar that I took my camera along today when I picked her up and took a picture of the advertisement:

What the hell is “Mr. Happy Crack”? What advertising genius thought that sounded like a good name for a corporate mascot? I read the sign to the FM, who needed a good laugh. We speculated on all of the products or services that might best be represented by a Mr. Happy Crack mascot, and no profession we could imagine would need or want to put up a billboard avertisement.
I’m sure the company itself is a fine establishment with an excellent staff and great customer service … but I find it hard to believe that they can utter the company motto (“A dry crack is a Happy Crack!”) with a straight face.
UPDATE: I’m informed by CQ reader Leo T that Mr. Happy Crack is already something of a cultural phenomenon. I guess this is what I get for watching the news instead of Jay Leno.