A good friend of CQ has spent decades in the Naval Reserve as a SEAL, volunteering regularly for active duty during conflicts. He has served in Afghanistan and the Persian Gulf as a SEAL and spent some time as a contractor in Iraq. He was in Iraq when Islamist “insurgents” murdered four contractors and desecrated their corpses — burning them, hanging them from a bridge, and then tearing them to pieces. Since then, Mike has occasionally shared his thoughts on Iraq and the war on terror with CQ readers. After the death of Zarqawi, Mike sent me this letter and allowed me to once again pass it along to you, after redacting some personal information.
As I am in and out of town on active duty until mid-summer I am really enjoying magical weekends off with my awesome high energy boys. At the same time I, like many veteran friends of the Iraq War conflict wish that I was in Iraq at this moment and especially for the coming days.
I wish this because I know that American and Multi-National Troops there, while still on careful guard, are going through well-deserved emotional highs. But even more important, for right now and just for a few more days, the Iraqi people as a whole are jubilant, they have real hope again, they are smiling and hugging Americans and foreigners from more than 30 Free Countries.
Please do this for me, because you only have a few days to do it and I don’t have time right now. Scour the internet news websites. Copy pictures of Iraqi people smiling, laughing, Iraqi patriots holding their guns in the air, arms around multi-national troops — clear evidence that we are doing the right thing in this small part of the greater Global War on Terrorism. Show these pictures to your children so that they will not be afraid to stand up for freedom in the dangerous days that still lie ahead of us.
I say you only have a few days to do it because I fear it will only last a few more days. You see some of our own elected officials and the heavily lobbied predominately liberal media will do everything possible to squelch images such as these. And although, most of the Iraqi people are appreciative of our efforts and genuinely believe they should press on until they are truly free of terrorism, much like impressionable children (even college-age children), they are influenced by media.
I was in country when Udai and Qusai Hussein were killed. This was a tentatively jubilant time for all the Iraqis I knew, especially those with direct knowledge of Udai’s horrific atrocities. But on December 13, 2003 when the Ace of Spades was captured, oh my God…I have never experienced or imagined such people in pure and utter jubilation. Did you see it? Did you get a small view of what a people coming out of bondage feel? It didn’t last long did it? Remember those stained fingers and proud faces of people voting in a free election (in higher percentages than our own free nation) for the first time in their nation’s history? Where are those pictures now?
When I first entered Iraq, less than half of the Deck of Cards (55 of Iraq’s Most Wanted) was accounted for. When I left more than a year later there were only 9 left. I participated in finding, fixing and finishing barely “medium value targets” – MVPs. The HVT that was recently finished is beyond huge, but a lot of ground will be lost if we as a people of the greatest free nation on earth cannot come together and support this War in meaningful ways.
For the moment we are doing our part in fighting terrorists and freeing people away from the shores of our own country. Now I am humbly asking you to do your part.
In the coming elections I very respectfully request that you vote for the candidates who take the strongest stands on prosecuting the Global War on Terrorism and protecting our own borders.
Your friend, family and servant,
Mike

Longtime CQ readers will remember my friend Mike the Contractor, who spent a long time in Iraq both in the Seals and as a contractor. I’ve published some of Mike’s letters in the past, especially those to his young sons in explaining the war on terror. Today Mike sends this message to his friends and family, reminding us of the role that his contractor friends continue to play in protecting Americans and Iraqis in the most dangerous areas. Mike will return to Iraq in the near future to continue this work himself.
On this Memorial Day, we honor the military men and women who have been killed in action while defending our freedoms. After seeing fallen military brethren that I have served with receive official honors and family compensation, I thought it would be appropriate to honor some other comrades-in-arms, which are my contractor brothers who also paid the ultimate price over the last couple years.
This e-mail will go out to a couple hundred military friends as well as civilians. Many of you already know very intimately what armed contractors do and also what it is to lose someone who has gone into the fray with you.
For those who don’t, there are two (2) main kinds of contractors in war zones.
The kind that you have frequently seen on TV pitifully held hostage and beheaded on video are the un-armed kind. They generally work for companies like KBR (a Halliburton subsidiary) or construction or oil companies and are the completely innocent people who are doing the major rebuilding and support work in Iraq. Their slayings are particularly heinous at all levels including the Islamic Qur’an that states “If you kill someone who is not himself a killer, it is as if you have killed all of mankind.” 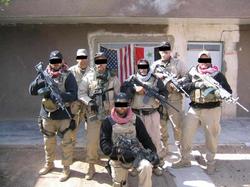