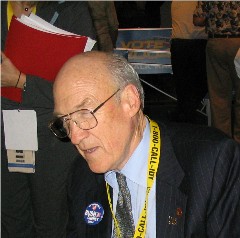 Former Wyoming Senator Alan Simpson came by Bloggers Corner just a few minutes ago and spoke to the group about liberal Republicanism, the electoral college, the current campaign and its tone, and John Kerry’s Senate career. As you might imagine from his press conferences during his tenure in Congress, Senator Simpson spoke directly and even bluntly in responding to our questions. My audio of the interview turned out poorly as Sean Hannity’s show insists on blaring out their program over speakers pointed directly at our area, but I can rebuild the important parts.
In response to questions regarding the Electoral College, Simpson strongly defended the current structure and explained that any attempt to eliminate it would never pass muster with enough states. Too many smaller states would lose their impact on presidential contests, and as Simpson said, no one would ever see a campaign outside of New York, Chicago, and California.
Simpson also responded about the current partisan brinksmanship by telling us to expect it to get worse. He advised anyone finding themselves under unfair attack to fire back and not to listen to advisors instructing them to rise above the attacks and ignore them. “An insult ignored is an insult believed,” Simpson said, and related that he even contradicted his own family’s wishes and responded on the offense.
“You’re all keyed up,” Simpson said his wife warned him, and he replied, “I know. It’s going to be fun.”
On John Kerry, Simpson clearly felt that he lacked any sort of legislative record and even gave us some insight into who John Kerry may really be as an explanation:
Q: You spent several years with John Kerry in the Senate. What is your opinion on his legislative accomplishments?
A: A big goose egg would be a pretty good approach, because I never saw anything that he did. But don’t forget, he was under the shadow of Ted Kennedy and his issues were much like Ted’s. He’s not an evil man, but he didn’t do anything that I remember. I was involved in significant legislation on immigration and nuclear high-level waste, and Superfund, and I don’t remember him doing any of that.
Q: No leadership, then?
A: None. I didn’t see any. In fact, I think he was almost shy. I think part of his problem right now is that I think he’s basically a shy person. They’ve got him in a role that’s uncomfortable for him.
Q: Thank you, Senator.
Simpson’s insight into Kerry should not go unnoticed. He worked with Kerry for at least two terms in the Senate and had the opportunity to see him in action. I found his observation about Kerry’s shyness intriguing, and it fits with the lack of personal connection that has caused much discussion and debate during the campaign season. The distance people feel from Kerry may not be something he can control, let alone overcome.