Former Congressman and Republican activist J. C. Watts visited with a few of us at Bloggers Corner. After his appearance on Hardball along with Zell Miller last night, we anticipated speaking to him about the exchange between Miller and host Chris Matthews, which we eventually 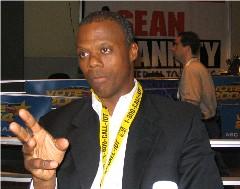 discussed. However, Watts spoke at length on a number of issues, especially Republican outreach to black communities. In fact, the interview went into such depth that I think a transcript may run too long. I’ll recap and quote where appropriate.
We started off discussing GOPAC, the Republican political-action committee dedicated to promoting grassroots growth for the GOP. Watts currently serves as its chairman, and he talked about how the 1994 Republican victory in capturing the House may have made the GOP too “fat and sassy” about its majority. He talked about the need to get away from the idea that Republicans (or anyone) can just throw a bunch of money around the last three weeks before the election and expect to win anything, let alone maintain a majority.
In fact, for the most part Watts focused on grass-roots growth, both of voters and candidates. Watts recently put together multimedia traning packages for recruitment of both. The former college quarterback and star member of the GOP House contingent seems perfectly at ease working behind the scenes to work at party-building, something that Republicans have long needed. Before we sat down, Watts was on the telephone telling someone that he was perfectly happy out of the limelight and risking capital in the market.
In regards to Republican outreach to the black community, Watts expressed both frustration and optimism. As a part-time preacher himself, he noted that Republicans and African-Americans share a lot of the same values, and yet do not seem to connect on an emotional level. Some of that can be chalked up to a lack of communication, Watts told us. Democrats, he explained, talk a lot about the concerns of the black community but largely only accomplish symbolic acts. Republicans deliver results but either fail completely to communicate them or forget to cover the symbolic gestures.
Watts holds out the most hope for the 18-45 demographic, the people who are less beholden to public figures like Jesse Jackson. He also talked about the myth of a monolithic black opinion set. “Republicans need to understand that when it comes to the black community, most black people don’t think alike. Most black people just vote alike.”
I asked Watts about drafting Alan Keyes from Maryland to run against Barack Obama in Illinois and whether he thought that would damage Republican credibility in Illinois and elsewhere. Keyes’ statements during the convention to the media regarding Dick Cheney’s lesbian daughter (“selfish hedonist”) and his odd and sudden embrace of slavery reparations in the form of income-tax waivers has many people shaking their heads here in New York, and a number of lower-level campaign officials and media analysts sympathetic to the GOP remarking off the record to me that the GOP should have left the ballot open rather than run Keyes.
Watts would not take the bait, and even insisted that if Keyes asked, Watts would campaign for him. “We both wear the same jersey,” he told us. “If Alan and Barack actually have a debate, I’d love to have the popcorn concession.” He thinks that there is a difference between Keyes and Hillary Clinton’s runs for the Senate but conceded that they were technical and likely would not make much difference to the voters in Illinois. “It’s almost like John Kerry trying to explain his Senate voting record,” he said. “If he has to explain, he loses.”
When we brought up Zell Miller, Watts’ face lit up with delight. “That’s about as good as it gets,” he replied. He’s worked with Chris Matthews before, and he felt that Matthews had no hidden agenda. However, he noted that Matthews worked for Tip O’Neill as a speechwriter and that Matthews knows the difference between hyperbole and literal statements, and that it was a bit hypocritical to press Miller on “spitballs”. Watts also happened to be around for the Frank Luntz focus group on Miller’s effect on independents, and eleven of the eighteen independents in the group answered that they were more likely to vote for Bush as a result of the speech.
Watts gave us a lot more in this interview than we expected, and his personal charm and intellectual flexibility made me wonder why the GOP has allowed this asset to ride the bench for so long. Let’s get J.C. back in the game.