I had an opportunity to meet with a member of the Minnesota delegation to the Republican convention last night, Kimani Jefferson, who represents the Anoka area. Kimani spoke for a few minutes with me regarding his transformation from a moderate Democrat to a 9/11 convert to the new national-security-based conservatism, and his enthusiasm for George Bush in 2004. Kimani is a former military officer who served aboard USS LaSalle, based in Italy, after graduating from the Air Force Academy in 1998. 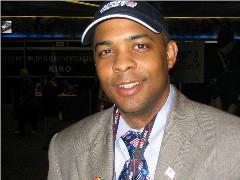 CQ: You’ve gone through this entire [delegate selection] process, which takes quite a bit of effort. What’s your motivation for doing that?
KJ: My daughter, more than anything else. My daughter is four, and I have another child on the way, November 12th. And I want the Constitution to mean something when she grows up.
CQ: What are your big issues here at the convention?
KJ: My big issue, number one, is national security. Because without national security, it doesn’t matter how the economy goes or anything else. … We should judges on the bench that take a strict constructionist view of the Constitution.
CQ: Which justice on the Supreme Court do you feel embodies that most?
KJ: Antonin Scalia.
CQ: Since you appear to be very committed to this [political] process, do you plan on running for office in Minnesota at the state or federal level?
KJ: Perhaps. It depends on how things go. I’ve only been in Minnesota for three years and in Coon Rapids for one year, and I don’t quite know the community. There may come a point where I feel comfortable enough in the community to feel that I am worthy of representing it.
CQ: How do you plan to extend your reach in the community in the meantime?
KJ: Right now, I’m the Anoka County Co-Chair for the Bush/Cheney campaign, the Metro chapter Chair of the Young Republicans. I’m trying to stay really active. I’m trying to build the teenage community of the Young Republicans, they’ve been really active in this campaign, and they’re excited. I think if we can get kids that age active in the process, it will a good seeding for the future. Those are the things that are important to me.
Kimani has a great presence and enthusiasm for his work here at the convention as well as an easygoing, friendly personality. His obvious delight at participating in this convention is infectious, and we wound up chatting for a good while afterwards. He spoke about his brother-in-law who turned his life around after being in prison and his desire to build faith-based initiatives to help people like his brother-in-law rejoin society.
Kimani bears watching in the next few years. I think Minnesotans will be hearing from him as soon as he decides he wants to be heard.