Good news, men — master shoe designer Manolo Blahnik has created a new line of men’s footwear. If you don’t recognize the name, your wives or girlfriends can explain that his designs are highly prized and very expensive. Now, possessors of the Y chromosome can have the access to Blahnik’s genius, as represented in this new design: 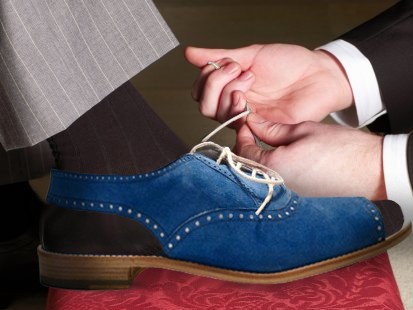 Men, we’ve waited years for this opportunity. Now we can also wear open-toed slingbacks with a low heel:

Well, guys, listen up. There’s a man who wants you to put on a pair slingbacks. And they’re blue suede, open-toed, and cost about as much as a flat screen TV.
This week, Manolo Blahnik, the Spanish designer famous for making women swoon over $700 stilettos, announced he’s putting out a line of men’s shoes. Among the styles: Afiyet, the aforementioned blue suede number, and Bir, a sandal made of leopard-print leather.
“There are some simple sandals in beautiful materials, and a few classics — with a twist,” Blahnik said in a statement. “I thought it was time to bring back some color into the male wardrobe.”

Unfortunately for me, I live in Minnesota, where the idea is to get more shoe around the foot, not less, especially this time of year. Not only would the snow spoil the blue suede — and is that cobalt blue? — but it would also give me frostbite. Come to think of it, why would I pay more for less shoe? And has it suddenly become fashionable to wear black socks with sandals? A lot of middle-aged and older men will celebrate that change.
ABC acknowledges that the market for Man-olo may be somewhat limited. “It’s not entirely clear who will buy Manolo Blahnik’s men’s shoes — or what they’ll wear with them,” the caption reads. Perhaps a nice cobalt-blue murse (man-purse)? Maybe a blue suede suit, complete with an oversized matching fedora and outrageous peacock feather? Afterwards, I can trick out my Honda CRV as a full-blown pimpmobile, too.
I think I’ll leave Manolo to the women, and stick to Bostonian and Johnston & Murphy for my dress shoes. Tell Santa to skip the slingbacks.