Those who know me and read my blog know that there isn’t too much that could tear me away from an AFC Championship game with my beloved Pittsburgh Steelers vying for a chance to play in the Super Bowl. Herb Suerth is an exception to the rule, however. Suerth is the president of the E Company Association, the company made famous in the HBO miniseries Band of Brothers. Suerth joined the company as a replacement in December 1944, which he noted in our conversation today as “sort of a bad place to come in.” Shortly after joining E Company, they deployed to a town in the Ardennes named Bastogne and found themselves surrounded by Germans in the Battle of the Bulge. General Anthony McAuliffe’s famous reply to a German request for surrender, “Nuts!”, came up in our conversation. Suerth recalled that “there was a lot of discussion about what the word really was. I think they cleaned it up for publication.” 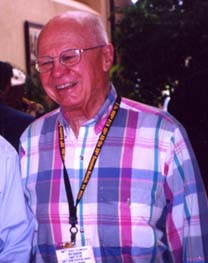 If you get the impression from that exchange that Herb Suerth has a good sense of humor and humility, then you guessed correctly. Suerth didn’t come to talk about himself, but to discuss another issue of proper recognition for one of the legendary officers of E Company. (I learned that one does not refer to them as “Easy Company” — that was an HBO artifact, not a reference used by the men themselves.) It would be an injustice not to mention the service of Suerth, who nearly had both legs taken off by an artillery shell in Bastogne. With compound fractures to both femurs but his femoral arteries miraculously intact, the surgeons managed to piece his legs back together. He spent eighteen months in hospitals recovering from his wounds. He went back into civilian life like so many of his generation — he went to college, got married, had nine children and had a successful career in business. He lives in Minnesota, retired but active in his community.
But what brought Suerth to our luncheon, along with my friend Randy Penrod of Savage Republican, was an effort to correct a bureaucratic decision to deny proper recognition to Major Dick Winters, the legendary leader of E Company from its first action in the war. After having E Company spread all over Normandy during the drop on D-Day -1, then-Lieutenant Winters got assigned the task of taking out three German 88s that had rained artillery shells on GIs landing at Utah Beach during D-Day. Despite having only 17 of his 140 men available for the task and missing the unit’s captain, Winters took the assignment without question. He found that the three German 88s were in fact four German 105s, complete with machine-gun nests and trenchworks reinforcement. Suerth told me that the Germans probably had upwards of 90 men in this site.
Despite this being the first action Winters had ever seen, he quickly drew up a strategy to attack the gun emplacements — and proceeded to rout the Germans from their entrenched positions, kill or capture almost all of them, destroy all four guns, and capture intelligence information that proved crucial in locating other artillery emplacements in Normandy. Winters’ first engagement in combat showed such brilliance that it is still taught as the textbook method of attacking reinforced positions at West Point. His commanding officer put him up for the Medal of Honor, but in a development that could only happen in the US Army bureaucracy, a decision had been made that only one MOH would be awarded in each division for the Normandy campaign — and another officer had already won that one (the remarkable Lt. Col. Robert G Cole).
Major Winters won the Distinguished Service Cross instead — no small achievement, but not the MoH that his men felt he deserved for his bravery, brilliance, and execution, which saved hundreds of lives on Utah Beach. His men continue to press for a reconsideration from the Department of Defense and the Secretary of the Army, but thus far have not been successful in getting a review. Suerth would like to see that addressed while Major Winters can live to receive the award himself.
Randy and I will be updating this effort as we move along. We hope to get a letter-writing campaign going to press Congress to ask for a reconsideration of the denial of the Medal of Honor for Major Winters. In the meantime, I want to thank Randy for arranging the thoroughly entertaining afternoon and having the honor of Mr. Suerth’s company for lunch.
CORRECTION: This is what I get for watching football when I’m supposed to be blogging. It should be General Anthony McAuliffe.