Phil Kerpen criticized the tax-first impulse of the current Congress, as demonstrated by the recent notion of increasing tax penalties on equity partnerships. In yesterday’s Wall Street Journal, he makes the case that Congress itself has caused much of the problem it seeks to correct through the Sarbanes-Oxley regulation — and uses the AMT to remind people what happens when Congress uses taxes to moderate the market:

Not content to merely spend the record influx of cash coming into the federal treasury, some members of Congress are pushing to hike the capital-gains tax on so-called “carried interest” — the share of partnership profits, typically 20%, that hedge-fund and private-equity investment managers have not sold to their outside investors. This would be nothing more than a punitive tax on those the congressmen perceive to be making too much money.
This is the same kind of thinking that led Congress in 1969 to enact the Alternative Minimum Tax. An effort to “soak the rich,” the AMT was supposed to fall on the 155 households that, because their income was mostly dividends from municipal bonds, paid no federal income taxes. But, because lawmakers conveniently forgot to index the AMT for inflation, it now hits an increasingly large portion of upper middle income folks, especially those in “Blue States” such as New York, New Jersey and California, who write off large state and local income taxes on their federal tax returns. …
Under current law, individual partners in an investment partnership such as a hedge fund or private equity fund are taxed based on what the underlying partnership income is; if the income comes from a capital gain, it is taxed at the capital gains rate. Ordinary income is taxed at ordinary income tax rates. This tax treatment is consistent with the rationale for a lower capital gains tax rate — to alleviate the double taxation of corporate-source income and to encourage risk taking, entrepreneurship and capital formation.
The legislation Congress is considering ends those protections, saying in effect that it doesn’t matter if the income is a clear-cut capital gain, such as proceeds from the sale of corporate stock. What matters is who receives the income, in this case politically unpopular rich guys.
All investors should be on notice that if the capital gains tax is considered a loophole for investment partnerships, it can’t be long before the capital gains tax is raised for everyone else. Some leading Democrats, including Oregon Sen. Ron Wyden and presidential candidate John Edwards, are already calling to do just that.

Well, some might say, so what? Why treat one kind of income differently than another? Isn’t that unfair, and doesn’t it just amount to a dodge to allow rich people to pay less than their share?
Not all income is equal in terms of its benefit to the economy. Investment carries risks that need to be rewarded in a “progressive” tax scheme. Otherwise, capital would increasingly get locked up in corporations with a steady and predictable return, rather than in the new ventures that create jobs and growth for the economy. If a system doesn’t recognize the value of the risk, fewer investors will spend their money on new ventures — and the economy will lose its engine for growth.
Now, in this case, advocates of the tax hike point out that they would only be bringing the equity-partnership tax to the same level as the corporate capital-gains tax, which is now at 35%. Kerpen answers that by advocating a drop in that rate to the same level as the existing equity-partnership rate. If Congress wants to make up for the loss of revenue that will occur when they restrict or eliminate the AMT, then they should open up more risk-reward in the current tax system to create more growth. That would allow investors to take more risks and to get rewarded for it.
Kerpen notes that two-thirds of all voters are now investors. Congress should give them a break and allow them to reap the rewards of investment and keep America competitive.
UPDATE: Phil Kerpen is also the head of Americans for Prosperity, and he wrote at length about the proper strategy for capital-gains tax policy. He includes this chart to show the effect of capital-gains tax cuts and tax increases over a three-year period: 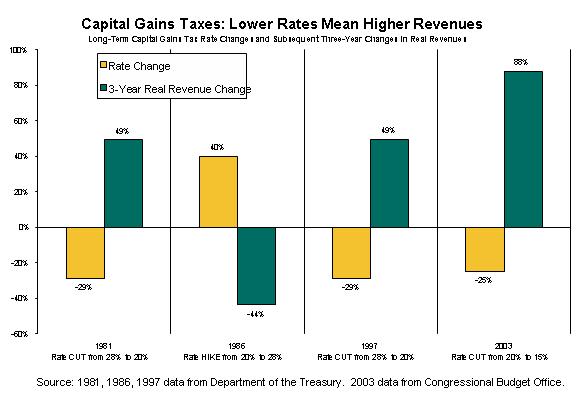 26 thoughts on “Why Not Increase Revenue Through Growth Rather Than Punishment?”