The Northern Alliance broadcast yesterday from the first Patriot Picnic, a listener-appreciation event from AM 1280 The Patriot. John Hinderaker has already posted a couple of pictures from the event from his first-hour appearance. He had to leave to join his family for a vacation, but he did get a chance to listen while we — lovingly — skewered him for his partial defense of the Kelo decision. (John, we can tell you apart from Karl Marx and Fidel Castro, even if our listeners can’t. You’re the one without the beard.) 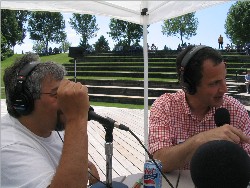 As you might sense, we had a terrific time at Staring Lake Park yesterday for our live show, and we had a great crowd on hand. In our second hour, Rep. Mark Kennedy dropped in for an interview, and he sounded fit and ready to take on the Senate race to replace Mark Dayton next year. Kennedy gave our listeners a taste of his passion and encyclopedic grasp of the issues facing Congress, and turned in what I felt was his most impressive media performance of his career.
This free picnic had its share of comedy outside of the NARN, too. One of the local trolls decided to come out of the woodwork. He decided to cleverly disguise himself in garb that he apparently thought would help him blend into the Patriot’s crowd: 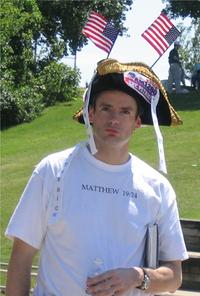 This clown actually rented this tricorner hat from a costume shop, a fact he revealed to Brian “Saint Paul” Ward when he got up to ask Kennedy a question. Anyone at the picnic not wearing a tricorner hat (IOW, all the rest of the humans there) could see that he appeared one musket short of a Minuteman, and when he attempted to harangue Kennedy, he removed all doubt. Of course, the streamers he attached to his hat tipped us off — one says “TAX CUTS FOR THE RICH”, another says “TORTURE”, and the third says “TREASON”.
Kennedy, unsurprisingly, issued a smack-down on the three-part question that Mr. Troll had obviously prepared. Brian even let him ask a follow-up question, something we don’t normally do, but Mr. Troll refused to leave the stage for at least fifteen minutes afterwards. I’m sure he went off and told his friends that we SILENCED HIM AND DENIED HIS FIRST AMENDMENT RIGHTS TO FREE SPEECH. The last we saw of Mr. Troll, he followed in Kennedy’s wake as he left the amphitheater.
All in all, we had a great time and enjoyed hanging out with our many friends from The Patriot, as well as the terrific food from Three Sons Catering. We were even happy to help the local costume industry get a bit more business as well as relieve a local lefty of cash that could have gone to International ANSWER or MoveOn. A fine success!