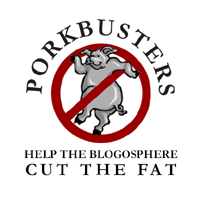 One of the benefits of the Not One Dime For Porkers campaign applies to the politicians and not to the electorate whose money disappears into these waste-laden programs. Sometimes, when politicians dig into half-baked pork, they find it quite damaging to their political health. Take Senate Minority Leader Harry Reid, for example. After making arrangements for a series of federal grants to a Nevada church, Reid now may suffer a bit of indigestion from the fraudulent use of the money:

The money that led to the indictment this week of two Las Vegas pastors and the wife of one of them came from federal grants arranged by Sen. Harry Reid in September 2001, a Reid spokeswoman said Wednesday.
Moving to distance Reid from a possible scandal, aide Tessa Hafen said the senator sought the money on behalf of a nonprofit social services agency and not for the churches or persons who have been accused of mishandling the money.
Advertisement
“The money was administered by the Department of Justice, and it went to the agency in Nevada (Alliance Collegiums Association of Nevada),” Hafen said.
The Rev. Willie Davis, the longtime pastor of Second Baptist Church, and his wife, Emma, were indicted Tuesday on fraud charges with an associate minister, the Rev. McTheron Jones.
They are accused of spending $330,000 from federal grants on themselves although the money was intended for halfway houses for prison inmates in Southern Nevada.

What was Reid doing giving federal money to churches in the first place? Won’t his ACLU allies have a fit over that kind of line-crossing between church and state? I expect that they will want to start a campaign in Nevada noting that Harry Reid represents the front line of the “new theocracy” that threatens America. For my part, I’m pleased to see that Democrats have sympathy for faith-based initiatives, even if they only have sympathy for those which benefit Democrats and crooked clerics instead of the poor and needy.
Putting that aside, this episode demonstrates that pork can be dangerous. Politicians would be wise to avoid it in the future, and allow the taxpayers to bring home their bacon where they know best how to handle it.

3 thoughts on “Pork — It’s What Eats Your Lunch”