Keith Ellison, the DFL’s candidate in MN-05, has a couple of problems in the local blogs this morning. First, our NARN partner Michael Brodkorb finds a photo of Ellison leading a march against police brutality in 1998, holding what looks like several copies of the Nation of Islam’s Final Call: 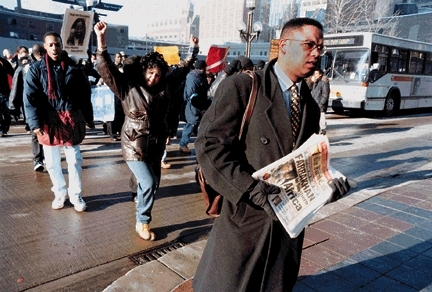 Brodkorb alleges that Ellison was distributing these copies at the event, which puts lie to Ellison’s insistence that he had no affiliation with the Nation of Islam or Louis Farrakhan after the Million Man March in 1995. MN Publius, who like Brodkorb does paid political work, defends Ellison by claiming that the picture doesn’t show Ellison distributing the copies of Final Call. I’m on the fence in that respect. Sometimes I pick up a copy of the Star Tribune, especially when dining out where no Internet connection exists, and I’d hate to be photographed doing that. On the other hand, I don’t usually pick up more than one copy and then display it while I’m marching down the street at a protest.
I’ll call that one a draw. However, Power Line — which has done marvelous work on Ellison — notes an Insight News article on Ellison’s run for the state legislature in 1998 that establishes his support for the Nation of Islam in the same time frame:

Ellison-Muhammed, who says his affiliation with the Nation of Islam doesn’t mean he isn’t running to represent all the people in the district, feels the critical issues on the table include criminal justice, education, and economic development. …
His solution? To use organizations that are already set up for community safety to contribute significantly to securing the neighborhood. Ellison-Muhammed would support legislation that bolsters patrol groups like Mission of Peace, the Nation of Islam, M.A.R.C.H Inc., AMAN, and SALAAM. …
Anticipating possible criticism for his NOI affiliation, Ellison-Muhammed says he is aware that not everyone appreciates what the Nation does and feels there is a propaganda war being waged against its leader, Minister Louis Farrakhan.

MN Publius argues that Ellison has never been a member of the Nation of Islam. In fact, Jon-David’s direct quote is “Keith was never a member of the Nation of Islam, and has never had anything to do with Louis Farrakhan.” This is patently false, and the Insight News article proves it. The article specifically goes into his connection to Farrakhan and the Nation of Islam as a way to assure Minnesotans that Ellison’s ties do not threaten Jewish voters, although Ellison takes the opportunity to declare that critics have victimized Farrakhan for pointing out his many anti-Semitic rants.
Ellison has lied and continues to lie about his ties to the Nation of Islam. At one point, he proposed having Farrakhan’s organization patrol the streets of Minneapolis in place of the police, and this wasn’t during his days as a U of M law student — it was during his political career. Ellison’s lies should concern voters in the Fifth Congressional District, and have them consider their alternatives to Ellison’s radicalism.

One thought on “Keith Ellison On The Hotseat”