Al Franken has new television commercials playing locally about his deep and abiding concern for Minnesotans, part of his primary campaign to win the Democratic nomination to challenge for Senator Norm Coleman’s seat. It talks about how he grew up in St. Louis Park among the fine people of the state. That apparently only applies to Democrats, however, even when stumping for votes. Otherwise, Franken demonstrates nothing but scorn:

According to Fritz, things started out fine with him taking photos of fellow Carls (that’s what [Carleton College] students call themselves) with Franken. Then Franken’s curiosity was raised about why Fritz didn’t want to be in a pic.
He’s a conservative, another Carl yelled out by way of explanation.
At that point, Franken reportedly began peppering Fritz with questions about supporting President George W. Bush and former President Ronald Reagan’s tax hikes. Fritz told me he got tense and, as he does in those situations, started chewing the inside of his mouth, a gesture he said was mimicked by Franken; Fritz also thought his style of speech was mocked by Franken.
An aide eventually interrupted Franken’s act, Fritz said, by announcing to the candidate that it was time to go.
Fritz told me Monday that he then stuck out his hand to shake Franken’s. “Well, at least it’s nice to meet you,” the GOPer said he told Franken, who reportedly replied, I can’t say the same.

Lest anyone think that Fritz just wants to spread lies about Franken, he has corroboration for his account. It comes from Pablo Kenney — who happens to be the president of the Carleton Democrats.
Franken has always been a bully. Temperamentally, he has some kind of deficiency that requires him to lash out at and ridicule people with whom he disagrees. He has a long record of this kind of behavior, including this heated confrontation with Laura Ingraham’s producer at the 2004 Republican National Convention, in which Franken’s handler had to drag him away before he got physically violent (pictures taken by Michael Brodkorb): 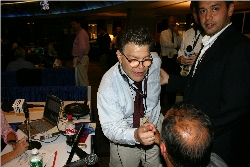 In this case, though, it seems especially egregious. Fritz just wanted to meet Franken, shake his hand, and had no intention to confront the supposed comedian. Instead of acting with some grace when confronted by the sight of a conservative at Carleton — admittedly a rare event — Franken found it amusing to pick on him in a setting where Franken figured he had the overwhelming advantage over the undergraduate in terms of numbers. It’s the same kind of mentality bullies use in middle-school locker rooms to humiliate their victims, and with him mocking Fritz’s nervous habits, similar tactics as well.
Al Franken. He came of age in Minnesota, but he didn’t grow up anywhere. (via SCSU Scholars)