Palestinians in the Gaza Strip sent a message to Europeans that belies the latter’s belief in the desire for freedom in the former. Gunmen forced the EU office in Gaza City to close and warned that it will remain shut until the EU apologizes for several publications running caricatures of Mohammed and Muslims this week:

Palestinian gunmen Thursday shut down the European Union’s office in Gaza City, demanding an apology for German, French and Norwegian newspapers reprinting cartoons featuring the prophet Mohammad, Palestinian security sources said.
The gunmen left a notice on the EU office’s door that the building would remain closed until Europeans apologize to Muslims, many of whom consider the cartoons offensive. …
Masked members of the militant groups Palestinian Islamic Jihad and Al Aqsa Martyrs Brigades, the armed wing of the Palestinian’s former ruling party, Fatah, fired bullets into the air, and a man read the group’s demands.
Palestinian officials said the gunmen were threatening to kidnap European workers if the European Union did not apologize.

The Europeans might want to rethink the entire oppressed-Palestinian meme right about now. Israel no longer occupies Gaza, and yet the terrorism there continues to grow unabated. Now the people who they insist want nothing but peace have warned that they will kidnap Europeans until they foreswear freedom of speech.
Perhaps the Europeans could ask the Palestinians about their own issues with cartoons. For instance, if they find this offensive — 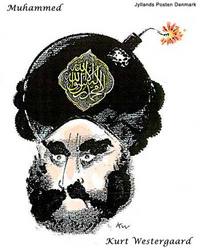 — then maybe they can explain this, which appeared in the Palestinian newspaper Al-Hayat Al-Jadida on March 22, 2000:

Pope: “Peace on Earth!” Satan/Jew: “Colonies on Earth!”
And if they consider this insulting to their honor — 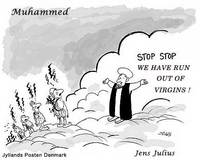 — then they can explain why the same paper published this in December 1999:

Old man: “20th Century” Young man: “21st Century” Above dwarf Jew: “Disease of the Century”
Those who protest the entire idea of satire and derision should not themselves indulge in it. Their actions reveal themselves as the terrorist thugs that they have always been.
And I note, as does Michelle Malkin and Judith Klinghoffer, that none of the major American media outlets have bothered to display these controversial cartoons. So much for the protectors of free speech and the people’s right to know.

3 thoughts on “The Gazan ‘Freedom Fighters’”