It’s almost too pathetic to post a response, but the Wonkette benchwarmers really have no clue about weblogs, photoshops, or criticism — and their latest attack on Michelle Malkin exposes them as wanna-bes. Michelle penned a cultural critique about the potential effect of trashy chic on young girls, as exemplified by Bratz dolls and the recent restyling of Charlotte Church. Rather than actually responding with any intellectual criticism, Wonkette instead posted a picture that supposedly depicts Michelle in a bikini in 1992 — as if that has anything to do with her critique of Charlotte Church.
As if that wasn’t bad enough, they failed to realize that the picture was a pretty obvious photoshop. Note for instance the size of Michelle’s head in proportion to the rest of the body: 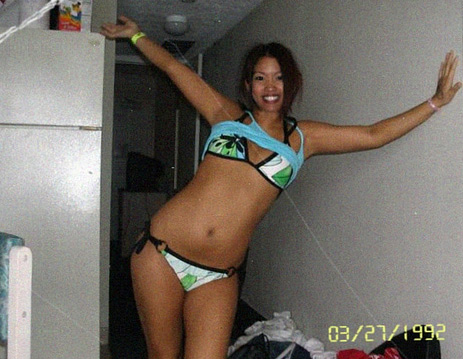 Now, I’ve met Michelle Malkin and spent time at her house. In fact, I’ve seen her standing next to a fridge a couple of times, and I can tell you that Michelle is significantly shorter than the woman in this photograph. She’s a little shorter than the First Mate, who gives up at least six inches to any standard-sized refrigerator. Anyone with half a brain and the ability to do about ten seconds of Googling could have figured that much out.
Besides, I have the original photograph: 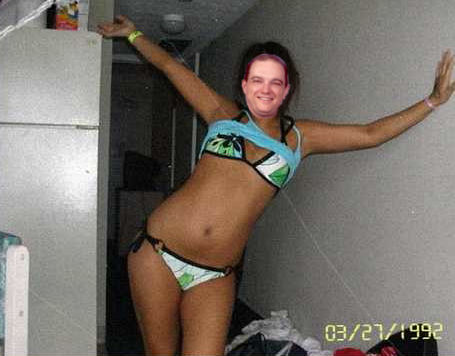 I was a lot wilder before I married the First Mate. (I was in better shape, too.)
Confronted with their rather stupid error, did the bloggers at Wonkette offer an apology? Of course not. They posted more photoshopped pictures, none of which had even a passing relationship with their original, puerile point. They seem insistent on acting like middle-school adolescents with Mommy’s Internet connection … which describes Wonkette on any given day.
I’m not sure what it is about Michelle’s success that drives the Left nuts, but the result reflects much more on them than it does on Michelle. (Allahpundit has a few choice words as well.)
UPDATE: Apparently, Gawker’s doubling down. Probably not smart in a legal sense to offer doctored photographs to give someone a false reputation as a slut. Seems to me that a smart lawyer could get a pretty decent payday off of his 30% with that case.
UPDATE II: It seems I’ve bumped the Miss World photographs off of Power Line. Maybe I could win Miss Egregiality!

2 thoughts on “The Incredible Lamery At Wonkette”